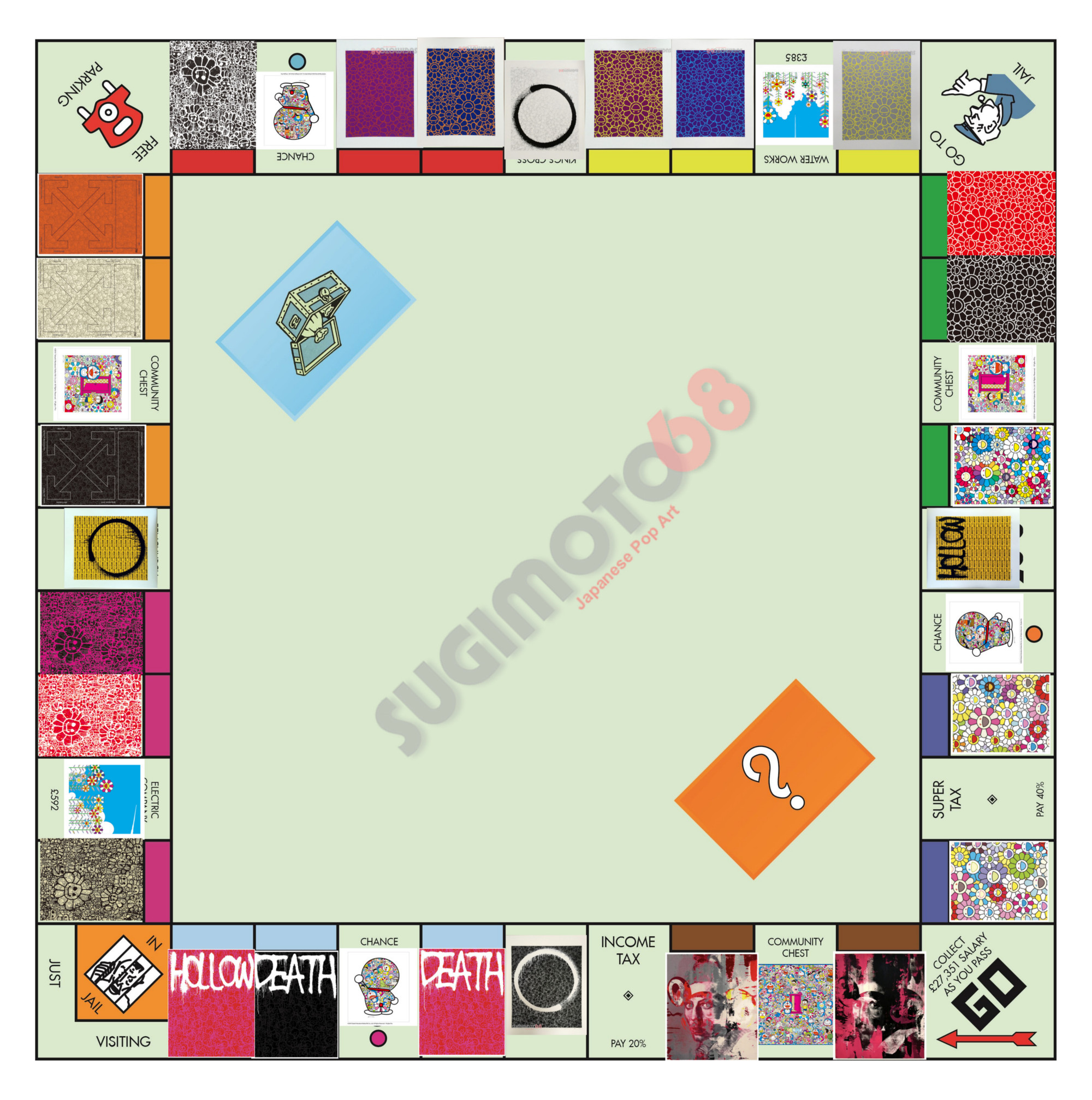 Murakami has continued to defy/undermine/exceed/confound expectations with his latest run of silkscreen and handmade lithograph prints. (Both, henceforth, generally referred to as hanga, Murakami’s Japanese appellation.) There have been nearly 50 hanga editions produced since 2017—the total number of Murakami hanga over the course of 17 years had been under 90 editions! Since 2017 a total of 7500 hanga prints have been produced, which exceeds the total number of around 5000 that Murakami had created over nearly 20 years!

Of course, the Murakami hanga created in this new wave are much smaller and simpler in general than those in prior generations; however, the move to handmade prints as a norm represent a dramatic shift in the Murakami mainstream print market. Even within the wave of mini-hanga, not all are created equal, with the simple Hollow and Death silkscreens on the low end of the wow-spectrum, and the luxurious Little Flower Paintings representing the apogee of prints––Park Place and Boardwalk in Silkopoly parlance. This extremely long awaited Sugimoto68 post will examine the recent proliferation of Murakami hanga.

2017 saw almost parity in the number of editions of both types, with the introduction of the Madsaki Flowers series and the first Seasons Flowers prints. In 2018 and currently in 2019, the number of hanga editions produced in each year exceeds the number of offset editions produced—quite a unique circumstance since Murakami typically releases far more offset print editions than hanga editions. Murakami’s hanga catalogue, I Love Prints and So I Make Them (page 16) describes the printmaking process for the larger Murakami hanga and notes the need for over one hundred screens and upwards to 3 months to produce a run of 50 silkscreens. The time and care required for such work meant that the pace of offset production typically exceeded hanga production greatly. At of the end of 2016, hanga consisted of 85 editions or 4835 hanga prints (85 x 50 prints per edition) in circulation in comparison to 107,100 offset prints (357 editions x 300 prints per edition). Now we have entered a new generation of Murakami hanga. The following section will describe the features of the new mini-hanga (hanga of less than 50 x 50 cm in size) that have made such a profound change on the Murakami market.

The chart below shows the latest wave of Murakami mini-hanga between 2017 and now. As discussed in the Sugimoto68 article on the origins of Madsaki, the Madsaki Flowers revolution most likely served as the key catalyst for Murakami to take a new production tack. Some key features define this new wave of prints.

First and foremost is the size—the latest wave of hanga consists largely of miniature prints, typically with fewer colors than the typical large Murakami hanga. One of the last large silkscreens, Shangri-La, Shangri-La, Shangri-La, had an image surface area of 65 cm x 65 cm––so over four square meters of image––and likely required over 100 screens to produce. In contrast, the typical image size of the new wave of hanga has an image area of about 37 cm x 30 cm or about one square meter of image, and typically a simpler color palette.

In this new wave, Murakami has increased hanga print runs by double or more. The typical new wave hanga has a run of 100 prints; however, 300 edition runs exist for popular collaborations with Abloh and the popular classic Japanese character Doraemon. While the literal number of hanga produced has not exceeded the number of offsets produced, this year the 2900 silkscreen count is very close to the 3300 offset print count. Kaikai Kiki can produce the typically simpler, smaller hanga much faster than the larger ones due to the use of smaller screens and easier quality control, which is a bigger problem with large screens according to I Love Prints and So I Make Them. Also popular collaborations demand a larger distribution for bigger audiences, and thereby provide a larger pool of compensation that can be divided among various rights holders/creators.

The result of a smaller, simpler print with larger runs is a cheaper commercial print. The retail prices of the mini-hanga (those less than 50 cm2) range from as low as 38,000 yen for Death/Hollow and upwards to 130,000 yen for Flowers on the Island Closest to Heaven. The mini-hanga classification becomes somewhat fuzzy due to the larger Doraemon prints, which better classify with regular sized Murakami hanga editions. In the case of the Doraemon hanga, they are meaningfully cheaper than the typical large Murakami hanga with the largest Doraemon silkscreen (56 x 104 cm) costing 220,500 yen, which is less than half the price of the 462,200 yen Shangri-La, Shangri-La, Shangri-La silkscreen (65 x 65 cm) that has a 25% smaller surface area. Perhaps the Doraemon prints are cheaper due to having a larger print run and proportionally cheaper production/labor costs; however, there may be also differences in the quality of materials used as well.

All in all, the new wave of Murakami silkscreens increase access to high quality Kaikai Kiki prints through increased production and lower retail prices. A new lane of prints betwixt the traditional Kaikai Kiki offset and silkscreen has successfully permeated the market, so it looks like Dr. Murakami has done it once again! Enjoy the stunning simplicity of the Kaikai Kiki New Wave Hanga!!!