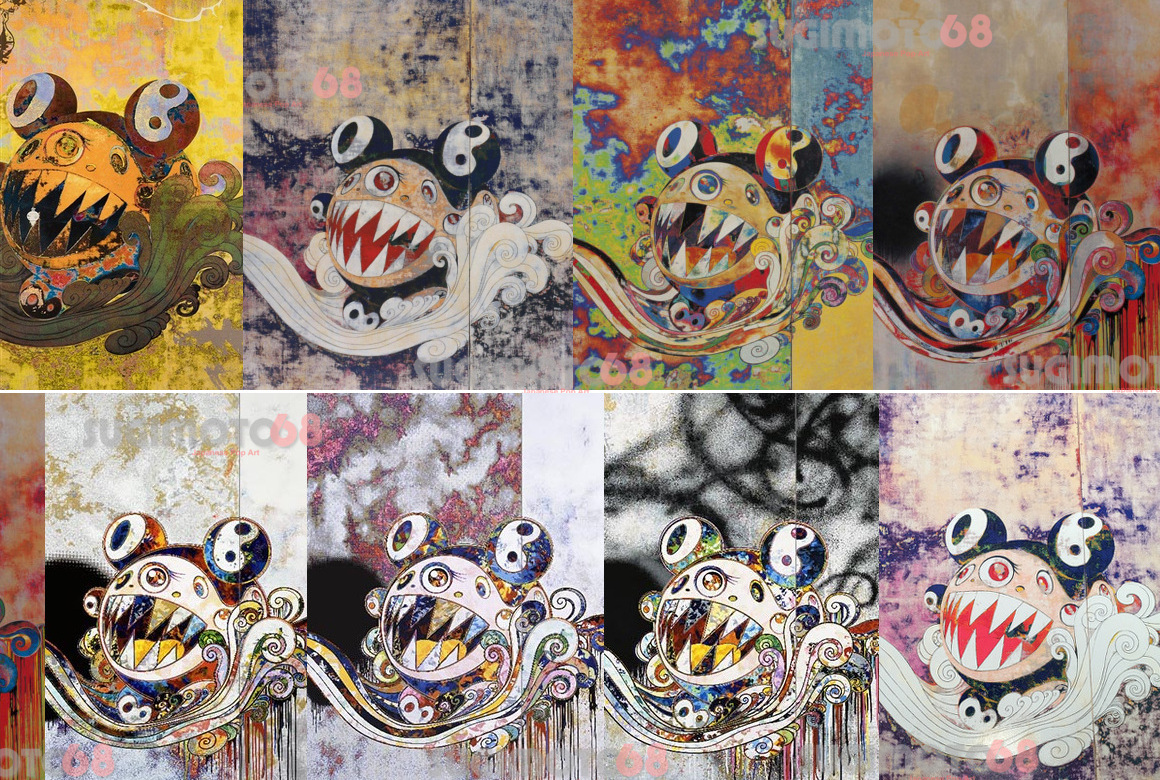 Murakami depends upon 727 blazing his trail, beside himself with joy. It’s the 20th anniversary of 727, the 20th year since the character debuted in Murakami’s quintessential painting in 1996. The piece currently resides in the MoMA San Francisco art collection, as a gift from David Teiger. Commemorating the birth of 727, Murakami released three new 727 offset variants AND a 727 silkscreen for 2016!!

Does 727 really mean nothing?

While the image itself evokes the style of Edo era woodblock artists such as Hokusai or Korin, whom Murakami emulates, the name has a contemporary essence. According to Murakami, the name “727” has no specific meaning. His assertion keeps in line with his repeated refrain: 意味の無意味の意味, which is literally translated into a wordplay as “the meaning of meaningless meaning” but better understood as “The meaning of the nonsense of meaning”–Murakami’s dissertation title and quote in reference to his Dob character in 1993. Deprived of a straightforward meaning, Murakami’s nomenclature may evoke the Boeing 727 aircraft for some; however, 727 more appropriately references the billboard campaign of the 727 Cosmetics company. On the Tokyo-Osaka Shinkansen route, the Osaka based cosmetics company began a subtle ad campaign consisting of billboards that simply display the company name. With just a brief sighting from one of the world’s fastest trains, the ubiquitous pastorally-framed billboard imprints the brand in the mind of the viewer. While 727 does not directly reference any meaning, we can speculate that the 727 Cosmetics marketing design influenced Murakami’s ultimate name for his painting masterpiece.

For the 727 completists out there, Sugimoto68 presents the list of all of the 727 prints released to date. Probably the least known of the Murakami 727 series, this print marks the debut of 727 in a print. Murakami released three prints using high quality Xerox reproductions; Yoshitomo Nara also employed Xeroxing in his early In the Floating World print series. There are also a couple of other variations of the 72727 print. The ultimate Murakami grail, which has not yet been completely overshadowed by its later versions. This the print you’re looking for! The upstart 727 prints from 2007 rival the popularity of the original 727! Murakami somehow improved upon his original design with a rust palette motif that put a nice spin on 727. Notice that the 2007 prints actually are slightly larger than the original. From 2016. Signed and Numbered Edition of 300. Offset lithography 4c process with hot stamp. 980 x 657 mm. The introduction of Madsaki in a Murakami print. The grail of grails has finally arrived with the first ever 727 silkscreen! The silkscreen with its visible layers and lively color palette exemplifies the best of the print genius of the Kaikai Kiki Factory. Read more about the 727 silkscreen here in the article, ‘The Murakami 727 silkscreen vs the 727 offset, what’s the difference??’.