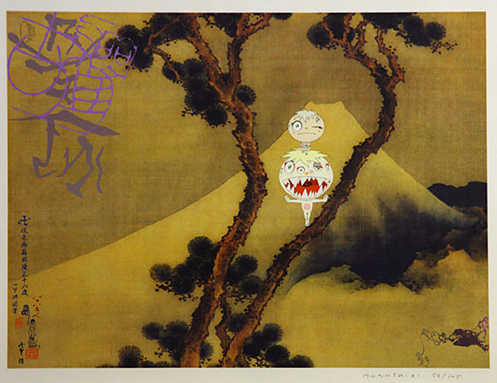 Murakami rose to fame on the coattails of Japan pop culture, but we also know that he developed his artistic roots through the study of Nihonga 日本画 or Japanese traditional aesthetic painting. His earliest prints such as the Hokusai inspired Manji Fuji 卍富士 (2001) (pictured above) incorporated stylized Japanese characters, but he did not revisit Nihonga until his Daruma print series in 2007. Since then he has produced other Nihonga inspired series such as Kansei and most recently Arhat. Murakami continues to recreate the Nihonga motif via seals and Japanese character accents, even alongside his pop imagery.

This inaugural entry will decode a 2011 print released in conjunction with the Murakami Versailles exhibit, Poka Poka, Warm and Sunny! Poka Poka serves as the most striking example of Murakami’s fusion of pop and Nihonga. Murakami takes the image from Vapor Trail (2006), adds a gold leaf Nihonga style background and tops it off with a textual Nihonga reference. A number of the characters in this print also appear in other Murakami prints. The text appears along the center of the right edge of Poka Poka.

1 鬼神斎蛇足軒隆 Kijinsai Dasokuken Takashi (The large black characters)
Kijinsai and Dasokuken are both aliases for a notable Edo Period artist, Soga Shohaku 曽我蕭白 Shohaku distinguished himself from his peers by adhering to an old, out of fashion style of painting. Shohaku’s pen names also appear somewhat tongue-in-cheek. Dasoku means “superfluous” and ken as a suffix can indicate “shop”. Murakami’s name Takashi appears in highlighted script at the end, so may invite comparison between himself and the “unconventional, superfluous” artist Shohaku. You may recognize Murakami’s Dragon In Clouds, Indigo Blue and Red Mutation from his 2010 Rome Gagosian exhibit. He basically reinterprets Shohaku’s 雲龍図 Dragon and Clouds (1763) housed at the Museum of Fine Arts, Boston.

2 声澗 Seikan (The lower large red seal)
This text reads from right to left as Kansei. Kan means “stream” and sei means “voice”, so it could be translated as something like the “voice of the stream” or “sound of the stream”. Most of Murakami’s Kansei series of round prints have the red 声澗 stamp on them.

4 氏隆 shi takeshi (writing on the bag carried by two figures)
The text reads from right to left as Takeshi-shi. It’s Murakami’s name with the address term –shi attached. –Shi could be interpreted as “Mr.”, but more accurately it is a suffix that marks a title of respect, so the title applies to Murakami’s recognition as a professional artist.

5 不擇鱗翁 Futaku okina oo? (The small orange seal)
The characters are too stylized to read, so there is no confirmed translation at this time. Will provide more information in a future post when/if it becomes available. Of course we also welcome your translations!

Murakami’s blend of traditional art and his unconventional pop creations result in a unique juxtaposition of images. While other artists do fuse the traditional with the modern, Murakami sometimes incorporates present and past in a very literal fashion by creating 21st century art within selected constraints of the Nihonga genre.

The rest of the series linked below:

What does the Murakami say #2: Reading your Murakami Open Your Hands Wide (Versailles print) and I met a Panda family